The Lessons of Savannah

Recently, Mapos was honored and delighted to be invited to participate in Savannah College of Art & Design‘s nine day long design celebration, SCAD Style 2010, as part of their “Sustainability in Action” panel discussion, along with co-panelists, the artist/inventor Britta Riley and restaurateur/urban farmer Chris Parachini. Our gregarious moderator, Matthew Mascotte, assembled the panel to highlight 3 unique but related practitioners in ongoing sustainable projects. Video of the inspirational and informative discussions, which occurred in both the Atlanta and Savannah campuses, can be seen via this link (once it’s available). Until then, we’ll refrain from spoilers and just share some brief thoughts on SCAD, Savannah, Southern Hospitality, and Ghosts:
Mapos enthusiastically applauds SCAD’s campus, which sets the standard for creative reuse of existing urban conditions and architecture, not to mention integration into the urban community of Savannah. During our brief stay, we toured a textiles school in an old elementary school (miniature handrails still intact) and an architecture school within an old railroad structure, dined in not one but 2 former bank structures (one of which was al fresco in the old drive through lane), perused SCAD’s library in a former big box department store, and had cocktails in a former prison decorated by student work. Our standing room only panel discussion occurred in a repurposed synagogue– stained glass still intact. This was just a small sampling of SCAD’s beautifully executed reuse projects in the community.

The City of Savannah exemplifies the perfection of the Grid in city planning. It is both rational and humanist in its execution. Divided by a green square every third block in all four directions, each park space with its own unique character and history, the deadly repetition of the typical grid transforms into something more of a rhythmic melody, human in scale and wonderful to explore by foot. Ironically, these refreshing squares were originally designed for military functions.

One could be excused for likening Savannah to Rome. Like the lush Italian capital, the architecture, urban spaces, and foliage of this port city seem frozen in a former era of great private and civic wealth, where civilized leisure activities by men and women dressed in white was a much larger part of the city’s pulse. Those days are long gone but this cityscape remains like a palimpsest on modern Savannah. As luck would have it, this apparent preservation was the result of decades of economic stagnation during the second half of the last century—so much preserved out of apparent indifference before SCAD came to town 30 years ago. Imagining entire swaths of this fair city completely empty, and overrun by Spanish moss, it’s little wonder that Savannah has garnered a reputation as America’s most haunted city. Ghost stories proliferate in this environment! 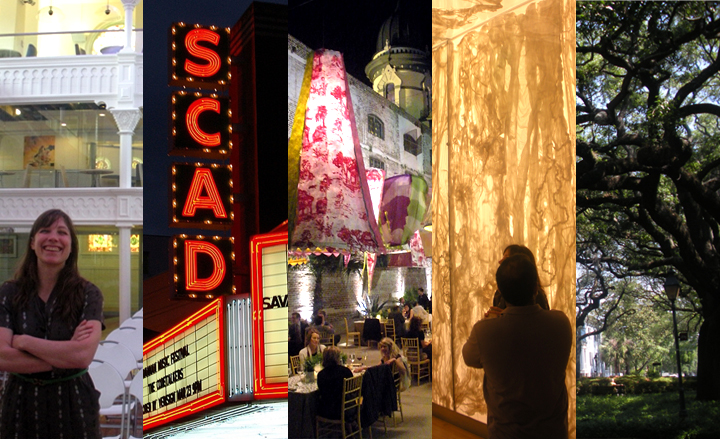 From L to R: Britta Riley at the Synagogue, SCAD’s re-purposed theater and prison, Chris Parachini admires some student work, and one of Savannah’s many incredible green squares.

When in Savannah, if you simply must eat pork prepared on a smokey, wood-fired grill, slathered in homemade bbq sauce, then drive (very fast) to Rib Hut BBQ in West Savannah, known by the locals as Mama’s (who still holds court in the open kitchen). This is where Matthew took us when we demanded authentic local BBQ. What we got was a transcendental experience which can only be described as a saucy “baptism by barbeque.”

It is said that Savannah is the “Hostess City” of the South, and we have never experienced such remarkably sincere hospitality. Everywhere we went, our new friends were eagerly pointing out the historic sites and curiosities with unaffected delight, both on and off the beaten path. A special thank you to Matthew Mascotte (our Moderator), Scott Singeisen (Chair of the Architecture Dept.), and Ashley Woodson (SCAD Event Master and new friend) for all of the time they spent with us.

Mapos is now conspiring for our next visit to this wonderful place—and Savannah truly is one of those rare things these days: a PLACE. Viva SCAD and viva Savannah, the Mostest City of the South!