This week in the esteemed Sunday Rag, two articles caught my attention. If you don’t have time to read them, don’t fret. Just read the cliff notes.

Ouroussoff had a couple of suggestions for Obama. He gives a pithy description of the problems facing urban America (and those other foolhardy citizens who jumped before testing the water) and to his credit, pithy prescriptions tangentially addressed for Obama to consider, to some of the most egregious examples. Oh poor Detroit, I will write more about you later. Oh LA! You, the wise dame of 21st century urban issues. You’ve been here before. Race. Water. Sprawl. Transportation. Immigration. Environment. You have been on the forefront of urban theory for 75 years. Did you know it? Will you show us a way out? Oh New Orleans, you weren’t meant to be on this list, but you are. So much potential. So much visceral culture. So much. 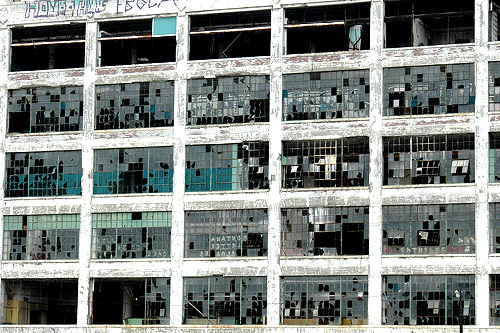 Though I normally get a rather vanilla taste when reading Ouroussoff (though I’m sure he’s a nice man), he has written something so on-the-mark it hit me like a cul-de-sac with thorny bristles about the edges. Are we going to get serious about the shrinking, broken systems that have created “cities” in America? And more importantly, are we going to acknowledge reality? The landscape that we know has been developed for a reason. We can not expect to progress if we deem the decisions that got us here as patently false. They have proven themselves failures. Sure, let’s not build like this anymore. But what were the criteria we were trying to define? What were the conditions we were trying to meet? What were the questions we were trying to answer?

Cohen finds Jane Jacobs in cyberspace. What have we been missing in urban design? We all know that Jacobs was right. But is Robert Moses wrong? The communities that self-form on Wikipedia are not the sidewalks of the West Village, though that is where they found their sacred birth. The are vocal, self-generated, grass-roots and an oh-so-grown-up urban renewal program sweeping away the past for a vision of the future. Pay attention, people are talking.