I recently re-watched Paris, I Love You, a series of 18 short films filmed by 18 different directors with their own plots. Each story was based on one administrative district of the twenty ‘arrondissements’ in Paris. The directors are able to pin point characteristics that are specific to that district and utilize it as an underlying ingredient in the development of their narratives. But that’s not to say that one story could only occur in its respective neighborhood. I had often been taught by professors that architects designate a certain space to be inhabited by a certain person for some specific activity. More often than not, it’s never the case. We eat in our beds, gather in the kitchen, sleep in the living room, and sing in the shower. As such, the way one utilizes and inhabits the space reflects certain values that are dear to the user. William H. Whyte’s documentary, The Social Life of Small Urban Spaces, is a good example of this 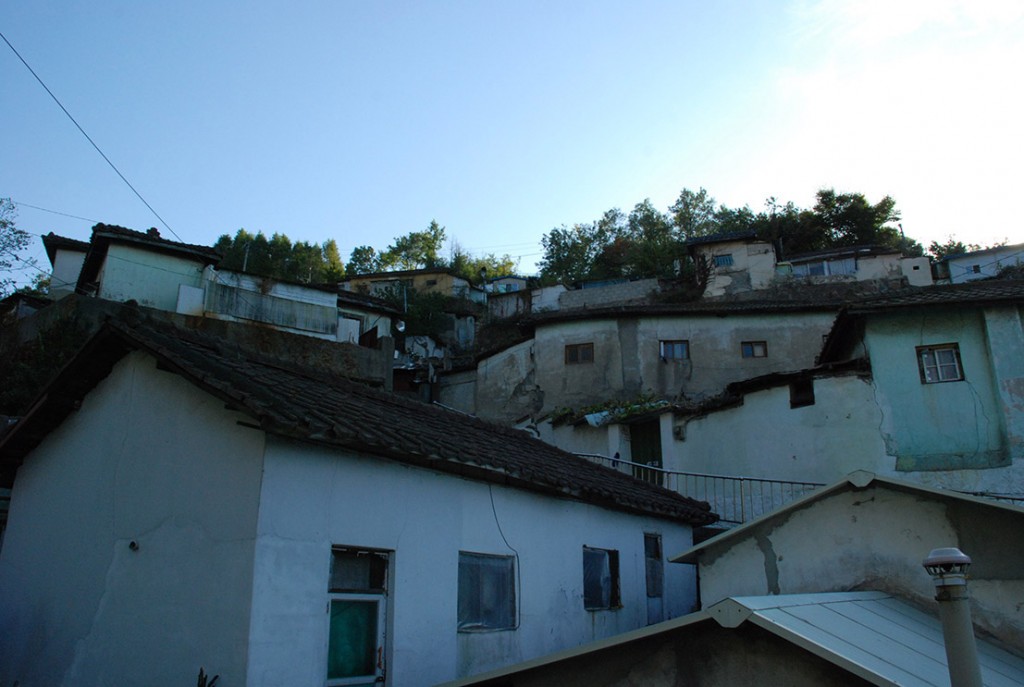 As an exercise, I wanted to see if I could “trace” back my own fictional narrative into a place that I had been in the past. As I was rummaging through a folder of photos, I stumbled upon a folder titled “Seoul”. When I briefly lived alone in Seoul I used to go on outings with a camera around my neck and a bottle of water in my hand. I chose a series of photos from a neighborhood nicknamed “Ant Village” in the outskirts of the city. Inspired by Japanese photographer, Daido Moriyama, I was interested in the various ways one could indirectly and objectively make accounts of a space and project a narrative that is embodied in a fictional, possibly real, third-party. That chance encounters and acquaintances have an untold story.

Ant Village is a small village on the mountain side on the outskirts of Seoul. It was where many refugees of the Korean War built temporary shelters out of available materials. Being on the mountain, the village is a complex maze of stairs that outsiders would definitely get lost in…

…and the siren sings again. She`ll kill that damn rooster one day. No, she won’t… There’s no alarm clock as reliable. She figures it feels good not to wake up to the blaring face of a counting clock. How do children sleep through this annoying shriek anyway? Best get up and leave before they wake up and convince her to stop delivering papers or serve fast-food. Staring at the blank wall she fixes her hair, as if looking into a mirror. She notices her younger son drew on the lower portion of the wall again. It appears to be a face. She is sure it’s better than looking at her own reflection. She packs three uniforms from the top drawer into a plastic bag, puts on a light jacket, and shoves her feet into the shoes. She reaches for the door knob and gently turns it, or else it`ll squeak like a rat. Once outside, she carefully pulls the door to close it tight. With the house behind her, she’s greeted by what looks like a scaled snake stretching to the bottom of the mountain. Sharp corners of each house face inward along the track. It’s as if there are grey stairs on the sides as well. 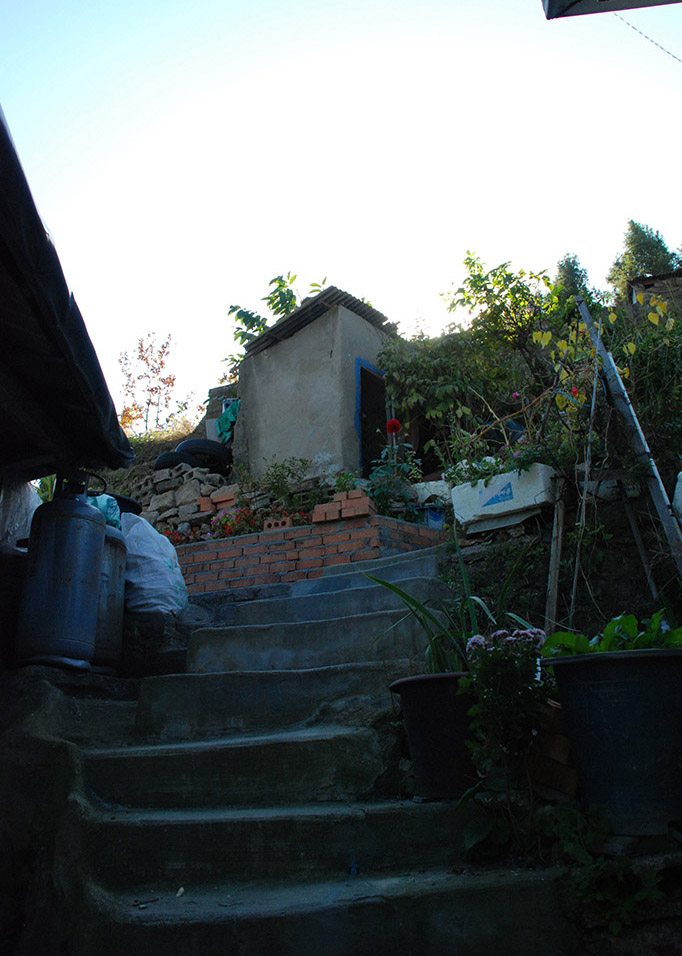 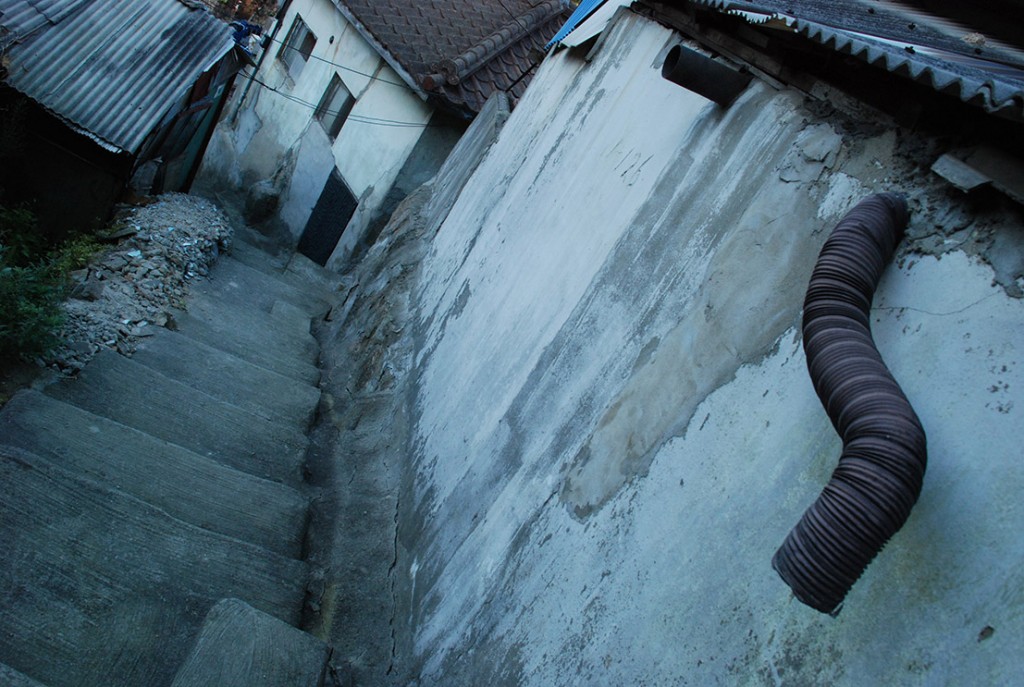 One.  She lets out a deep sigh and takes her first step down. The children always complained why they built the village on the face of a mountain. They would prefer elevators and living in apartments. In the city, the higher you live, the more expensive the real estate. Here, it just meant a better workout. She would tell them that is was so that they wouldn’t get lost. That a mountain narrows as you climb and the moment you can’t climb any higher, will be a place small enough for them to eventually meet.

23. She’s counting the number of steps as she’s going down which is equal to the number she will have to climb later. You need to be careful where you step as the stairs are irregular and take the shape they want. Head down, she navigates the ground as her left foot, then the right, enters the periphery of her vision. She notices she’s wearing a different pair of socks. The shoes are a clean brown tone. They used to be white. But they won’t know and they won’t care.

49. Going down the stairs, she has no peace of mind to look around the neighborhood. Before she turns the corner of the Kims’ house, the youngest cries out from afar. “See you later, mom!” She doesn’t look back, as if she didn’t hear it. But nothing pierces her ears as deep and heavily as her daughter’s chirp of a cheer. Raindrops start to fall on the sandy trail. She doesn’t care to look up and check the sky. She’s sure the rain will stop soon.

“안녕하세요. 웬디스입니다. 주문하시겠습니까?” A couple orders two drinks but leaves them at the counter. The girl dashes out of the store and the boy follows- perhaps an argument. She hides the orders to drink on her break. You never serve leftovers. Another man steps in line.

She’s delivered the last paper for the day and steps further down into the subways to head back home.  No need to count again since they have escalators. Standing on the moving precipice she realizes, yet again, how much deeper the city can go.

974 to climb. Head down, she starts to count up again from one. At around 80, she notices a pink heart drawn on the rise of the step. One on the right, then one on the left. She dares to look up. Hearts lay on the trail as far as the eye can see. She looks around and notices that the Lees’ have a new giant sunflower on their wall; the Parks’ a flock of yellow birds; the Yoons’, a turtle with a colorful shell. She stops counting and marvels at this sight. 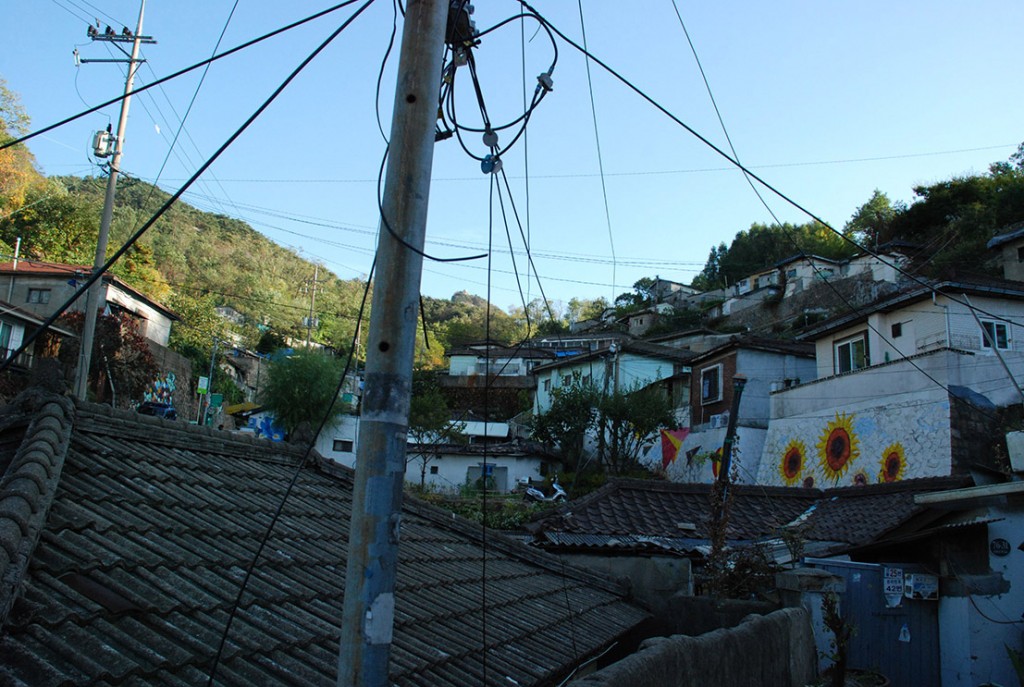 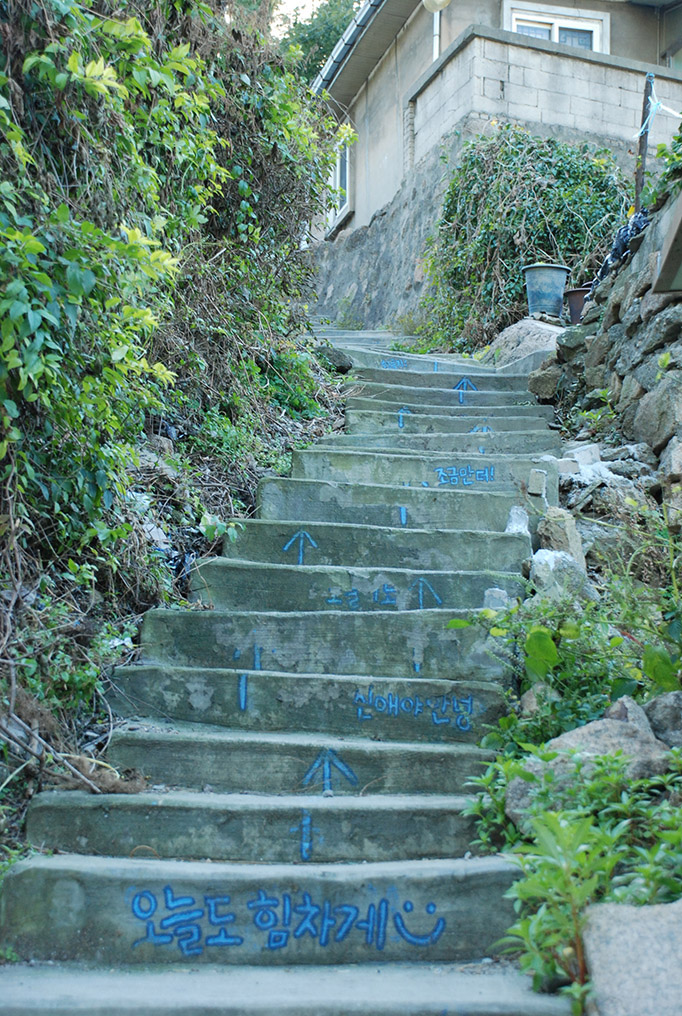 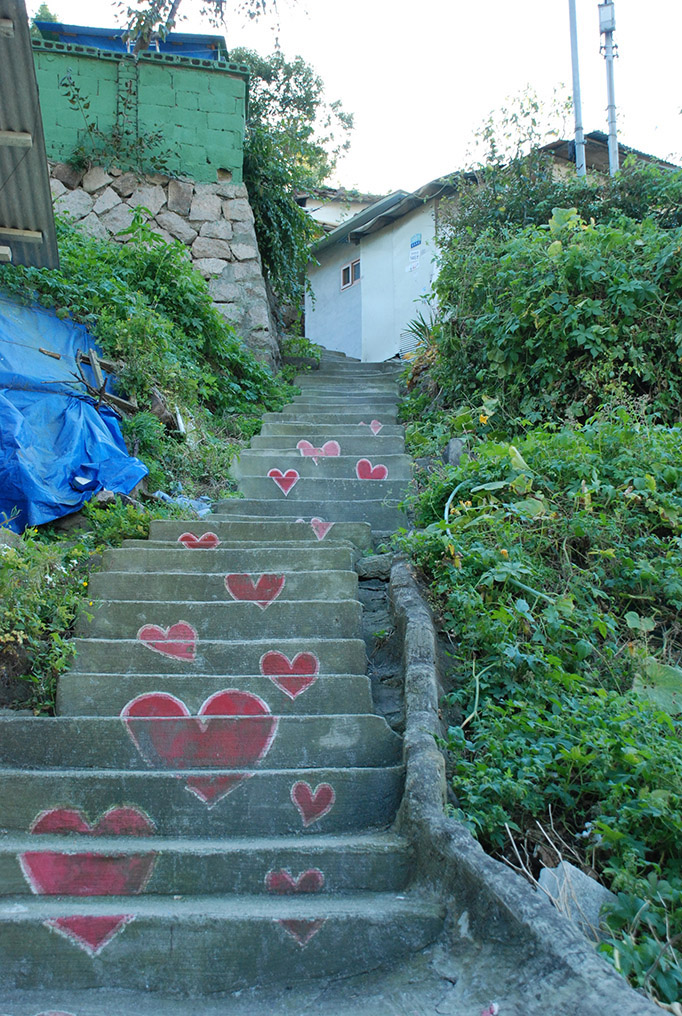 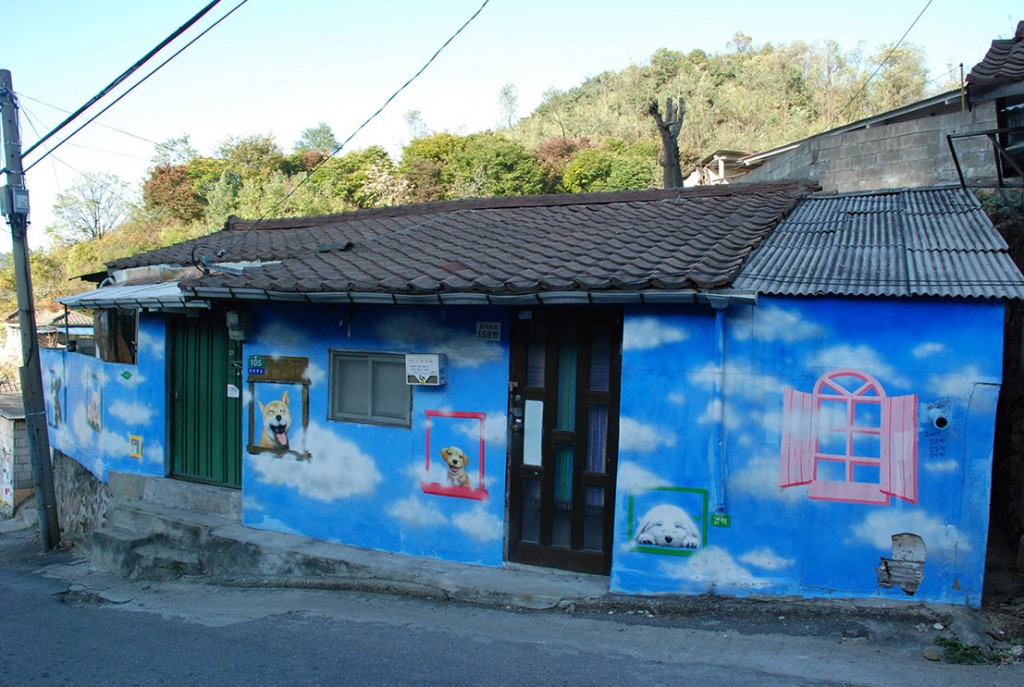 910. The pink hearts turned to blue arrows. The steps read ‘조금만더!’ and ‘거의다왔어!’ The arduous mountain side never felt this uplifting. From now on, she would happily descend in order to climb back up.

924. She turns the corner. Three children are waiting at the top.

923. She stops, and steps back around the corner. She smiles. She takes a deep breath, and runs up the remaining 51. 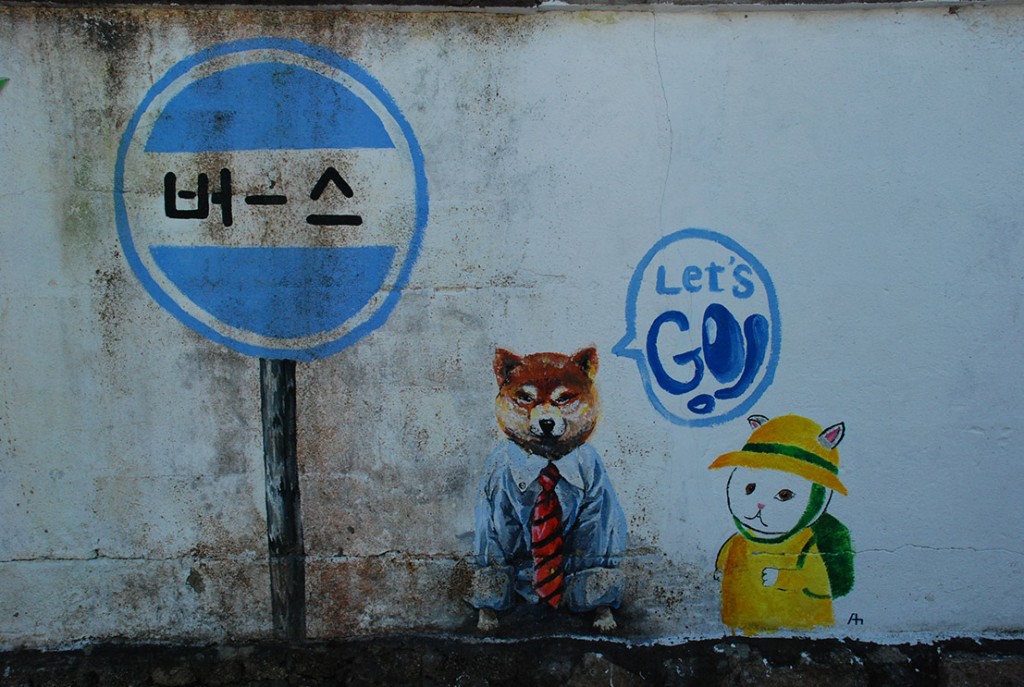 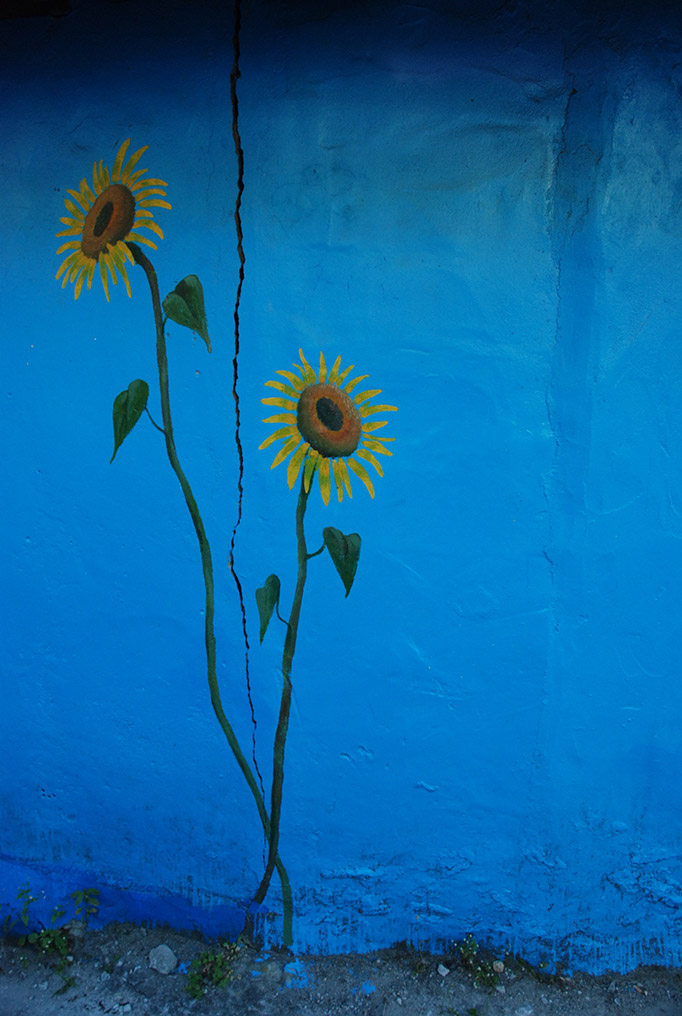 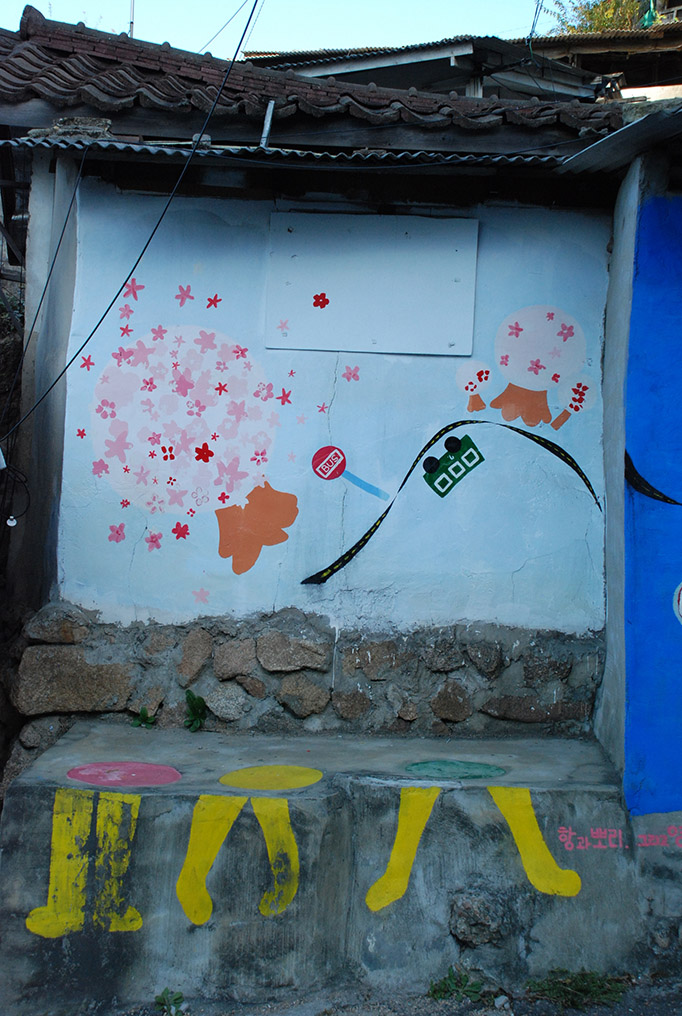 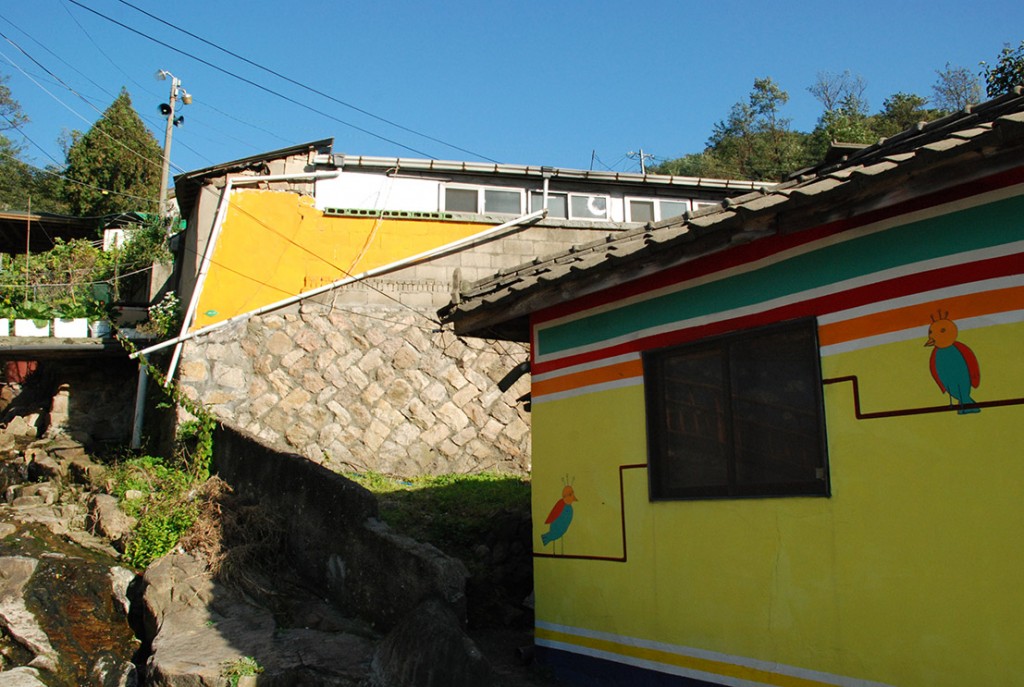 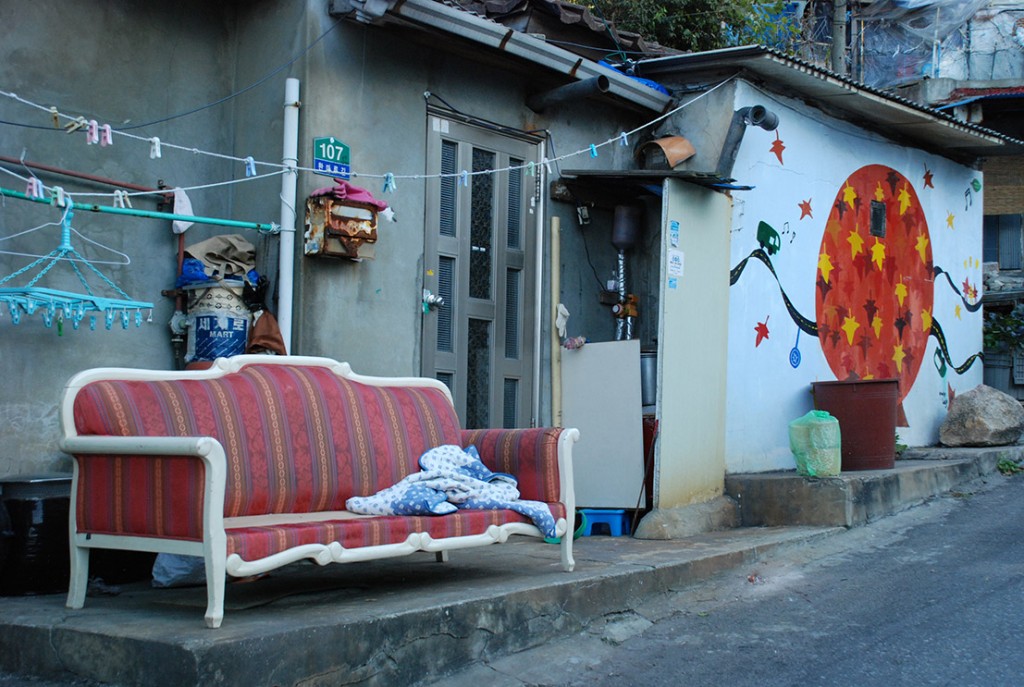