Just off the shores of Brooklyn and Manhattan is a small island. 172 acres of little used open space sprinkled with empty and aging buildings, barracks, houses and forts. It’s almost impossible to accurately describe the feeling of being so close to the great American city yet definitely separated. Governor’s island sits in direct contrast to everything we have come to love and expect of New York: tall, big, loud, crowded, active, fast. It is a culture of non-congestion. It is the quintessential “Other.” I have been “over there” a handful of times times and every visit brings a visceral desire to hide away in some obscure corner, stay overnight, and make the island the most amazing Capture the Flag playing field and summer escape known to humanity. I guess the Lenape Indians had this figured out two axes, some beads, trinkets, and 300 years ago.

This summer, Creative Time has produced an art event titled, “This World & Nearer Ones.” 18 artists have installed 18 art works. The most effective are those that integrate their unique setting into the final piece.

The Bruce High Quality Foundation produced a short film, “Isle of the Dead.” It turns the entire island, and in particular its cinema location, as a home to a resurrected art culture. The bastions of the visual arts have been killed by the recession. As a viewer of the film, each and everyone of us is participating in its macabre but hopeful afterlife. Timely for sure, I felt like an extra in Michael Jackson’s Thriller video – full of mad energy covered in smeared mascara.

Edgar Arceneaux hid sub-woofers through out an old officer’s house. As you wander around, you are confronted with intense vibrations and seismic rumblings. The house is beyond haunted. It literally puts the hairs on you neck on end. It’s an indescribable sensation. Exciting and troubling like a being briefly shocked by a live electrical wire.

The most beautiful installation was by Anthony McCall. He transformed the nave of an old church into a smoke filled light projection. He cuts a palpable dark volume with laser-like intensity of light.

And then there’s hammocks. And picnics. And bike riding. And sunset gazing. There used to be a Burger King that served Beer. I’m writing this from the attic of house no.14. This is the new Mapos World Domination Headquarters. 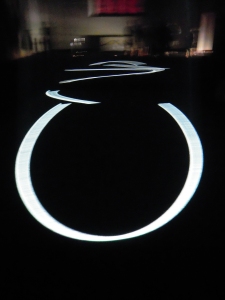