Dismantling one of New York’s major thoroughfares – Broadway – brings the expected dreams of a greener, pedestrian friendly future, and the requisite cristicisms. We come down on the side of the “liberal elite” on this one, even though we’re not that elite (liberal, yes).

Why? Grand ideas are needed to address grand problems. Traffic congestion in New York, like health care in this country, has been broken for decades. This, everyone agrees. And when solutions are offered, it is not surprising that human nature falls prey to the “fear of change.” The naysayers are just that: people accustomed to say “nay” to change simply because it is an unknown. When Central Park was suggested, the city was in an uproar. Who would do away with the park now? 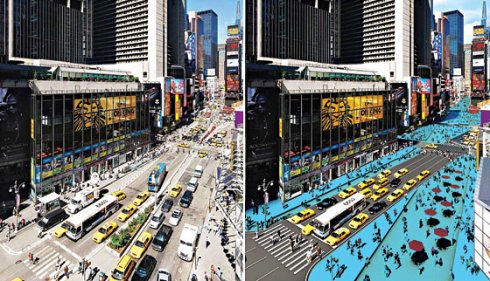 Read this for a great review of this dramatic change.