Like most involved New Yorkers, Mapos has been keenly following the developments at the Atlantic Yards in Brooklyn. In Ouroussoff’s latest blip in the Times, he rightly lambasts the latest turn of events. Like the Hudson Yards and Ground Zero before (and Penn Station, Lincoln Center, ad infinitum, save Rockefeller Center), large scale urban developments go the way of Darwin on Spike TV: large, strong, and dumb.

I have always felt bad for Beyer Blinder Belle, the competent, thoughtful firm who’s first proposals for Ground Zero were thrown under the bus. To be sure, I was no friend of their schemes. They were boxy, unimaginative, boring, and not fit for the emotional spotlight worthy of the new development. Enter the invited competition of starchitects – and even better, teams of starchitects working together! – to wow us with their skill and vision. I applauded the process and felt that finally, somebody was doing something right. We all remember Daniel Liebeskind won, as he should.  His scheme showed bravado, talent, hope, excitement, and plenty of emotion. Does anyone remember what happened in the ensuing years? Liebeskind’s masterplan was slowly compromised by money, special interests, and vocal critics close to the project, including the newly paranoid police department. It became the master plan of the LCD (lowest common denominator) and highly, highly, reminiscent of Beyer Blinder Belle’s original plan. (Oh, the way the cookie crumbles. I hope the suits at BBB have pre-printed “I told you so” greeting cards.) It is a shame, a downright public shame, that real imaginative development just can’t seem to happen. I feel happy for BBB that they were vindicated, but I feel worse for us, the citizens and visitors to New York. We will never be allowed to walk the dynamic vision that actually won the competition. 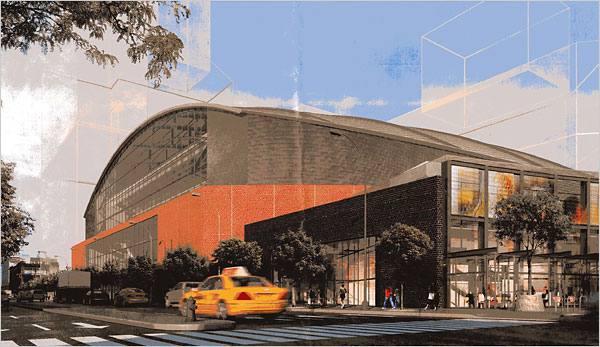 Back at Atlantic Yards, I was never a fan of Frank Gehry’s masterplan for one simple reason: homogeneity. It was all designed by one man (read: one firm) and no singular entity should have that much control (see Robert Moses). Like a good meal, cities are made with diversity and the right mix of different ingredients. If pressed, however, I will admit with Ourroussof that Gehry’s scheme was appropriately “urban.” It involved layered spaces and complex spatial relationships. It was not your father’s urban infill. All that is gone now. Beyer Blinder Belle, taking a turn as Ellerbe Becket, has the last laugh again. What is left is a Home Depot with a basketball court inside. In the center of Brooklyn. In the center of OUR city. Beyer Blinder Belle and Ellerbe Becket may be right. In fact, they ARE right. They knew all along that left to its own devices, human nature will succumb to corporate decision making and bland, boring, SAFE conculsions. I hate that they are right.