Over at the Morgan Library the work of Palladio is on display. The curators exhibit the master’s work alongside more contemporary buildings based on his legacy. While recent architectural scholarship shows there were many errors in Palladio’s own analysis of ancient Roman architecture (perhaps his wood-and-laser measuring stick was off?), it does not diminish the extent that his drawings and built works influenced Western architecture, from Jefferson to Schinkel to Gilbert. I wonder where the modern references are? Surely Palladio’s fantacism for order, proportion, and scale still echo in a world without obvious Ionic capitals and articulated pediments? It would be interesting, and infinitely more relevant, to follow this thesis into the 21st century. 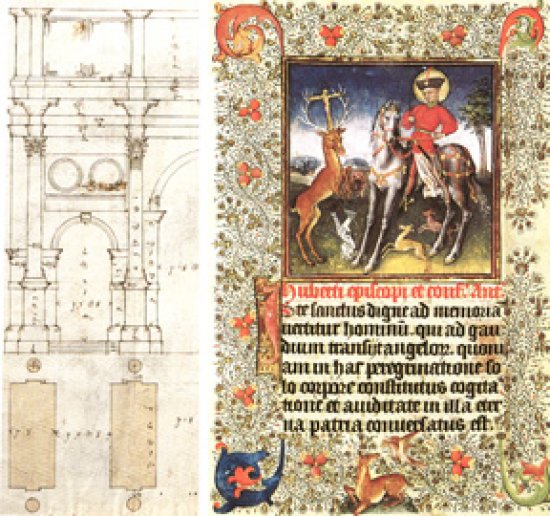 Left, Palldio. Right, the Master of Catherine of Cleves

Wandering out of the upstairs galleries, I stumbled upon one of the most riveting exhibits I’ve seen in awhile. No offense to the draftsmanship of Palladio, but the beauty of the “The Hours of Catherine of Cleves” manuscript stopped me in my tracks. Despite my rudimentary knowledge of the biblical stories at hand (and a complete lack of Dutch), the incredibly rich miniatures illuminated the trials, triumphs, and tragedies in a clear narrative. It is visual story-telling at it’s finest, written in the mid-16th century no less. The legacy of this manuscript is self-evident at every turn: typography, comic novels, portraiture, story-boarding, even immersive motion graphics. Anything telling a story in multi-media, really. The amount of detail in such small dimensions is astounding. The brilliance of color is arresting. The combination of story, illustration, painting, text, history, and ultimately a voice for an entire culture, sets a very high bar for content communication.