Flying in at night, Chicago explodes like the Big Bang. The city rapidly spreads North, South, and West from the Loop in radial streets with a gridded fabric desperately trying to hold it all together. The blackness of Lake Michigan serves as the primordial soup before time, and the darkened prairie beyond, I guess, is its future. All cities change, of course, and as I descended into O’Hare recently, I was thinking of how this constant growth and expansion seems everywhere now. New York is struggling with its waterfront and rising tides, but also its mad dash towards towers of excess. Los Angeles is trying, after all these years, to become urban. It’s rediscovering its downtown and mass transit as well as its original waterfront, the LA River. Seattle is booming. The Nashville skyline has more construction cranes than buildings. All of North Brooklyn seems to be under scaffolding. Detroit – even Detroit – is abuzz with growth. The changes are small and select, to be sure, but the optimism is palpable.

So with the subject of urban change on my mind, I was excited to visit the inaugural – and only – architecture biennial in North America. Big Bang Chicago was surely going to assemble and organize the crazy entropy that is the built environment.

I should give it some credit. It’s difficult, if not impossible, to try to codify such a huge subject matter in one exhibit. It’s also difficult, if not impossible, to display such a diverse and dense discipline into impactful and memorable exhibits. I’ve always felt that architecture exhibits work great when photos, drawings, and especially models of buildings serve as content. Research, theory, and esoteric diagrams, however, are a chore to dynamically display. Too much text makes me yawn, and I’m an architect. I wonder how the lay public would treat the biennial. Or do they know it’s even happening? Perhaps it’s a fool’s errand to even try to define the “State of the Art of Architecture,” as the biennial is titled, but I’m glad the organizers tried. Hopefully with ongoing biennials, the curators will get better at prioritizing content AND presentation, not just content.

What I did get out of the biennial was a few memorable exhibits and a general sense that the state of architecture is more diverse, more global, more socially-conscious, than it has been in a generation. If asked what I took away from the biennial, I would say that the entrants were from all over the world, with voices heard from Eastern Europe, Africa, Latin America, South Asia, and yes, Western Europe, East Asia, and North America. I would also say that the entrants skewed a bit towards the developing world with socially conscious missions, from community-centered design approaches and low budget construction techniques that will hopefully serve the millions (or billions) of us that can’t afford a roof over our head, let alone an architect. (This latter point got under the skin of Patrick Schumacher, Director at Zaha Hadid Architects. His scathing critique of the biennial saw the death of design at the hands of do-gooders. Poor Patrick. First, don’t think that this biennial – or any biennial – can actually sum up the state of architecture. And please, please, please, don’t think that everyone has to think – or design – like you do. You’re a great architect, Patrick, keep up the good work! And thank god, not everything that gets built in the world looks like my rumpled bed covers).

So, like most art/design exhibits, what struck a chord with me were the entrants that were presented well for a biennial, not, necessarily, for their respective briefs. There were probably dozens of intelligent projects that represent the State of the Art of Architecture but I passed them by. The following is a short collection of beautiful installations that caught my eye.

Piranesi Circus by Atelier Bow-Wow. I love the playfulness of the suspension stairs and bridges, and especially the use of the outdoor space. Question: where’s the secret door to this world? 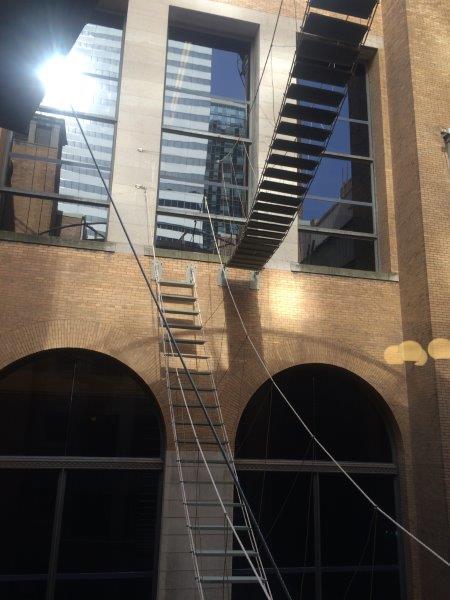 Hotel Tulum by Productura. So shiny. So perfect. So heavy. And interesting use of brass to represent a project in the tropics. 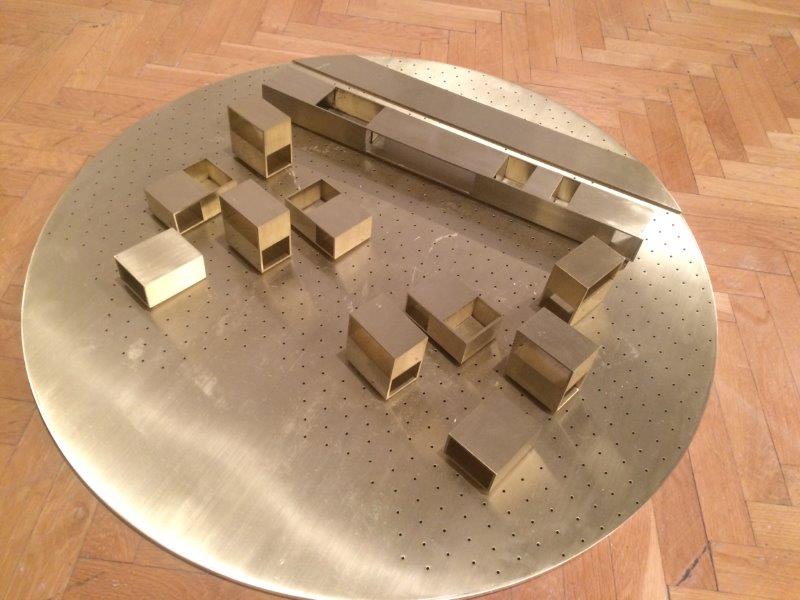 Passage by SO-IL. Putting off-the-shelf materials to sculptural use always gets my blood pumping. Plus it’s an inventive way to treat an otherwise banal corridor. 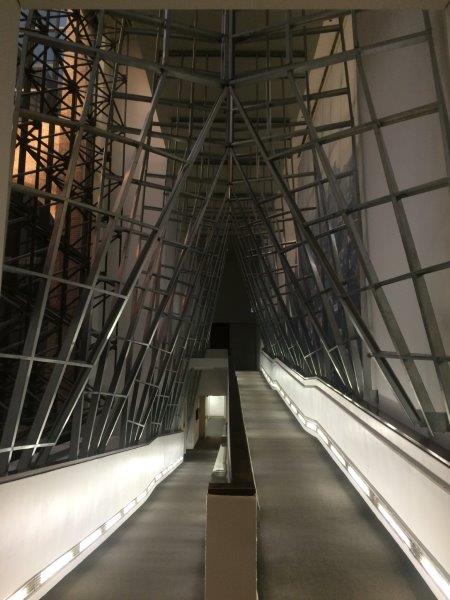 Sustainable Housing by Tatiana Bilbao. Palettes as walls is not terribly new, but seeing this cheap little house inside the grand hall underlines the point that people in poverty could use some new ideas. 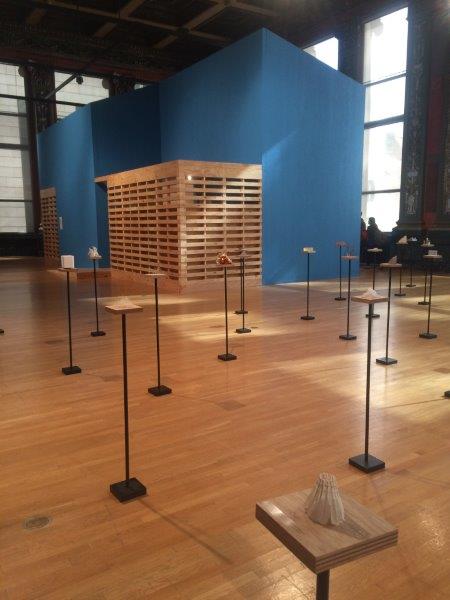 I’m not sure what these things by Tomas Saraceno are, or if they represent something, but they’re amazingly beautiful to behold. 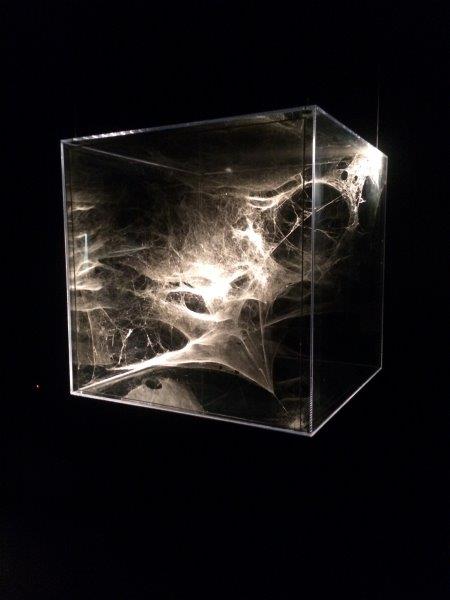 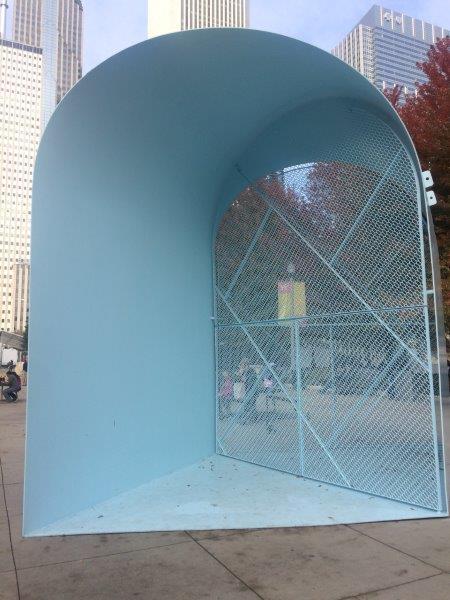 Chicago Horizon by Ultramoderne. I hope this pavilion-by-the-lake finds a use. Right now it’s a striking-yet-empty built example of a little-used structural material that looks great: cross laminated timber (CLT). 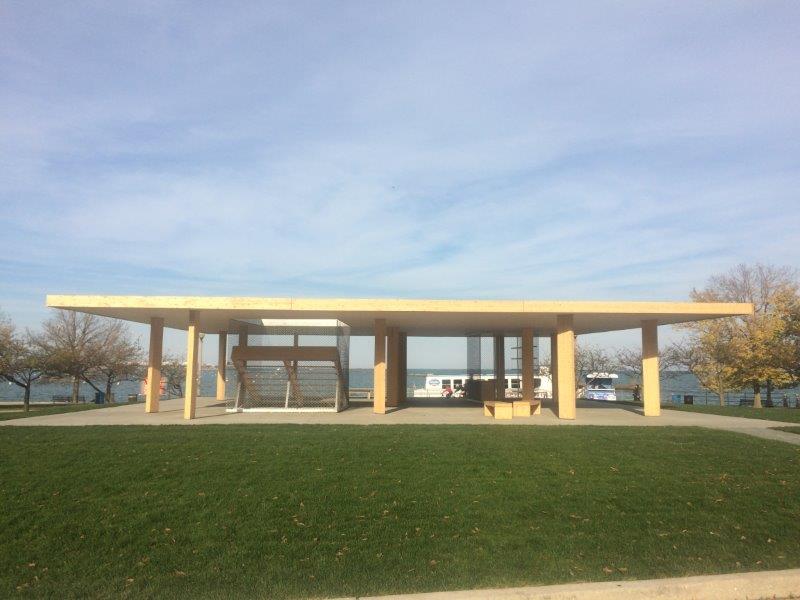 I’m not sure if this is part of the biennial or a long lost relic left by Charles Moore. It’s sad and tired and haunting sitting on the beach on an overcast day. 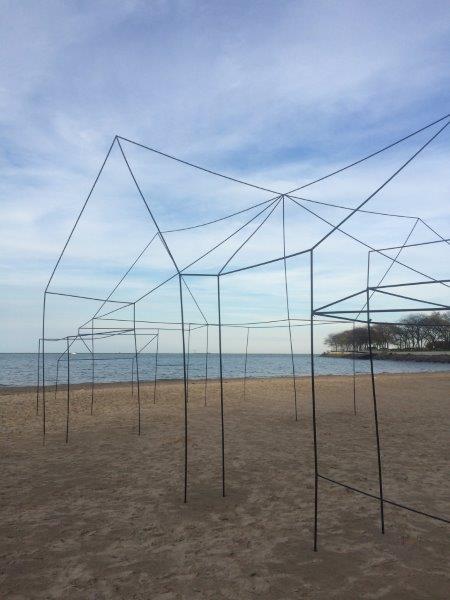 Environmental Communications: Contact High by International House of Architecture (IHA). Remember light tables and how they uncovered a whole miniature world of color? 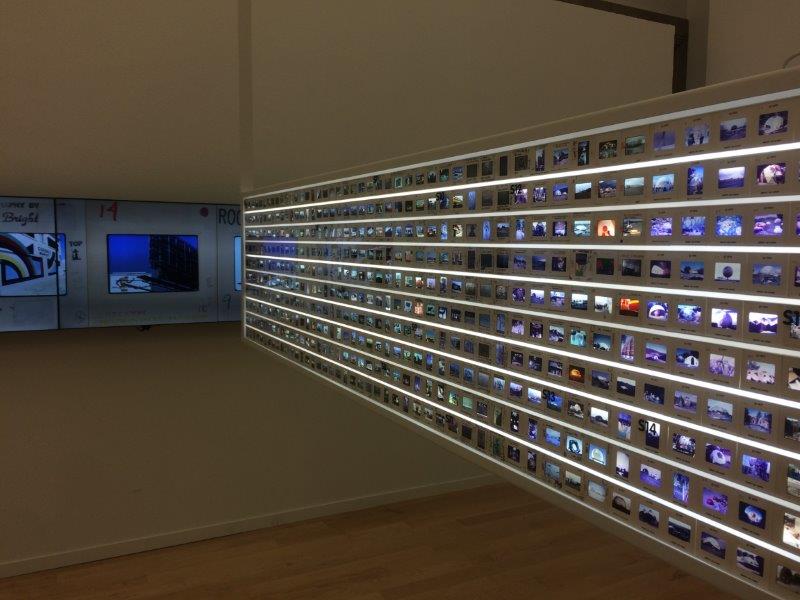 And this, my favorite. Architecture is Everywhere by Sou Fujimoto. A room full of beautiful models each on their individual stand. More is more. 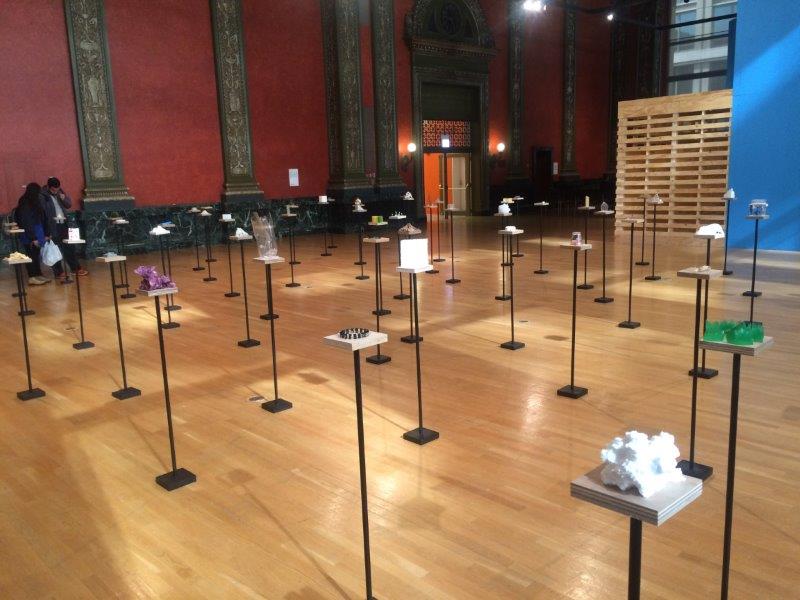 And a few more parting shots: 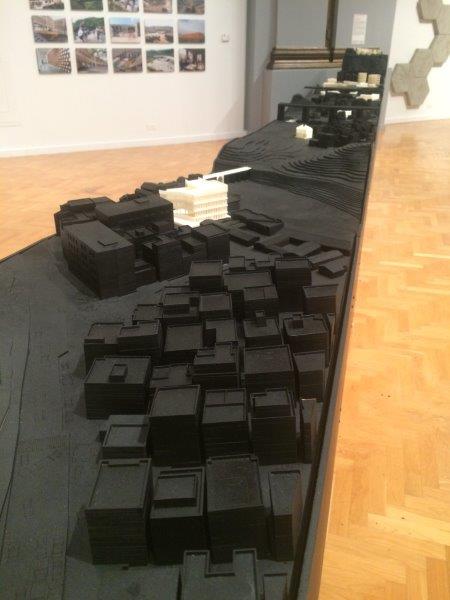 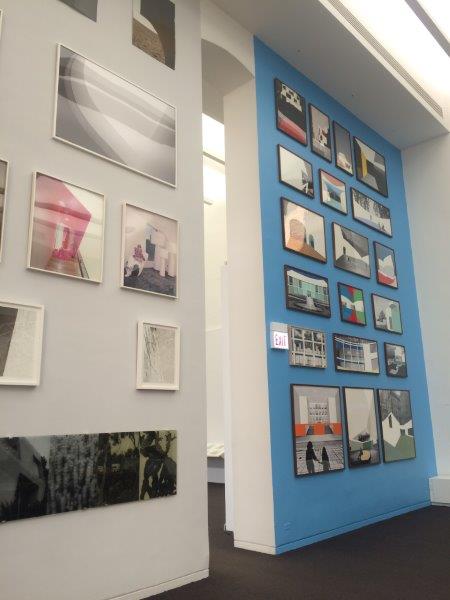 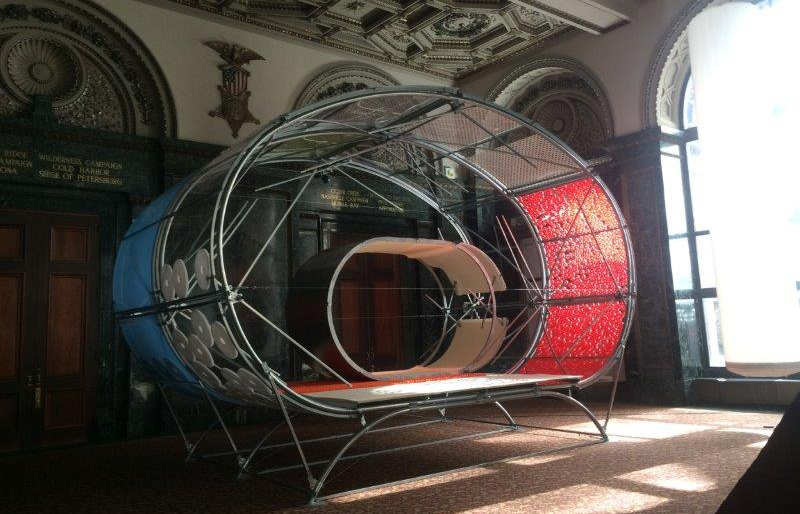 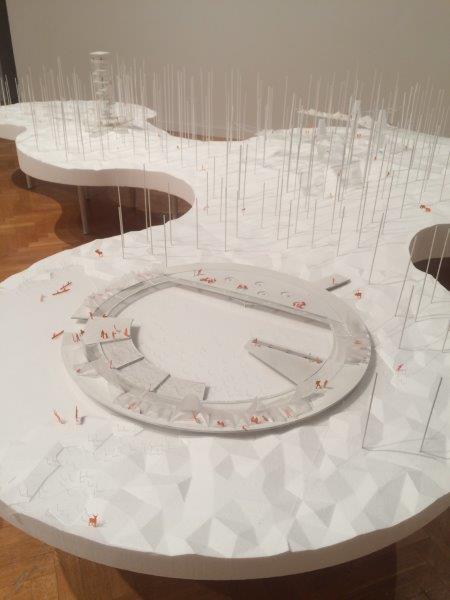 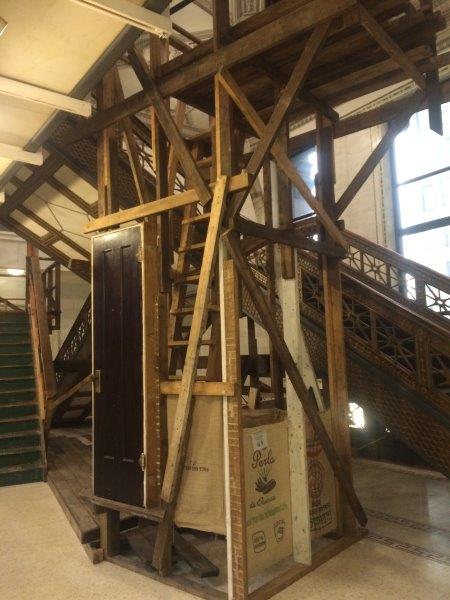 All images by Colin Brice