A Funny Thing Happened on the way to the Forum

While most people have been generally obsessed for the past 15 years with buildings and the starchitects behind them, the “public realm,” for lack of a better term, went into hibernation. Now, with the economy stalled and the amount of new buildings – and their architects – stalled, the forums of our cities are getting some much deserved attention. Hey, we’re architects and we support the construction of new and renovated buildings as a matter of livelihood, but that has not ceased our intense interest in the care and development of successful urban places where these buildings live and where people move and breathe between buildings. Where we can stand back and look. And talk. And eat. And play. If our cities were just buildings, we’d be living on the Death Star. The buildings may define a city by it’s skyline, but it’s the public spaces between buildings that define a city by it’s people, their culture, and how they inhabit and move through it. 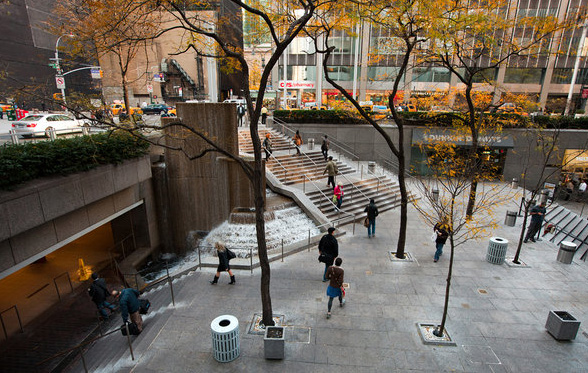 “We’ve been so fixated on fancy new buildings that we’ve lost sight of the spaces they occupy and we share,” Michael Kimmelman says in his report on New York’s amazing public spaces. He spent an afternoon walking through some of New York’s famous – and infamous – public spaces with the urban planner and architect Alexander Garvin. Earlier this year I took a class of NYU students on a very similar walking tour. The point of both walks was to point out the canvas that our building icons sit upon. How do buildings hit the streets? How do the spaces around them support human movement, transportation, relaxation, urban enjoyment? I argued on my walk that most buildings do a rather poor job of transitioning to the sidewalk. They look great from a distance and from aerial photographs – the postcard shots – but often fail at negotiating the all too important human scale at the ground. The Seagram building is seminal architecture, to be sure. The plaza in front (and on the sides) has much to be desired.

Call it “ground up” architecture instead of “trickle down.” Kimmelman writes about how the Dutch begin their urban design projects thinking about granular aspects like subway entrances, bike paths, crosswalks, and storefronts before handing off building sites to architects. here in the States it’s most often the reverse. The developers design their buildings, and the public realm has to adapt to what is given them. I am always struck in Europe with the prevalence of “square,” or, “plaza, piazza, place, ter, trg, torg, plein, platz,” or any number of translations that make open space in the city so loved and respected. It’s hip to be square.